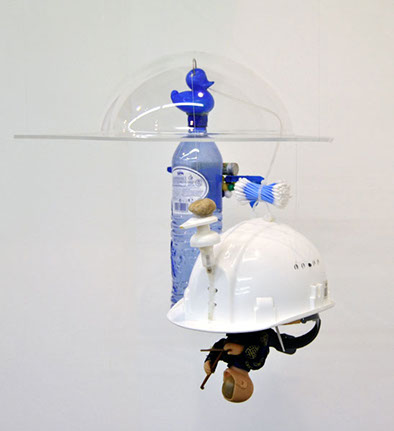 THANKFULLY IN THE EARTH'S ATMOSPHERE

(...) Honoré δ’O is a sort of contemporary Marco Polo (Wallace, Stanley, Livingstone, Baffin), who navigates his way through the mangrove thickets, marshlands, woods and forests, river deltas, tundras, taigas, steppes and savannas of this atmosphere of images, of what we might call a global media sphere. And by ‘media sphere’ I do not of course mean the archipelago of globally operating media conglomerates which decide how the global village presents itself to its inhabitants, but simply the meteorite belt of ‘media’, literally ‘medium’ or ‘means’ and mediating technologies, which make the world visible and rotate in concentric layers round the Earth like an allegorical companion piece to the atmosphere or stratosphere. We might describe this ‘media sphere’, again in analogy with the atmosphere, as a blanket of cloud, and the ice-crystals which constitute these cloud formations the images which ‘populate’ this media sphere. And just as the elements which make up the atmosphere can manifest themselves in different states, from gaseous (oxygen, hydrogen) through liquid (water, rain) to solid (snow, ice), we, too, can visualize the different conditions in which the images that make up the media sphere, manifest themselves. There is the spectral, intangible image which only consists of rays of light and light intensities (for example, the film image, the projected image), and dances gaseous ‘in space’: in a sense it only ‘exists’ when the shafts of light fall on a physical substrate at a specific angle and at the right distance. This in a nutshell is the principle of Tant Pis, Honoré δ’O’s encyclopaedic work to which this book is devoted. There are also the generic two-dimensional images, for example of photography, which besiege us every day in their thousands – take, for example, advertising and television images – and form a seemingly endless ‘decor’ that is always around us; we might also call this the ‘media effect’, the media sphere in the narrow sense: the so-called ‘image flow’, the avalanche and tidal wave of images, in which the image proves to be ‘liquid’, difficult to contain or check, and also erratic and powerful. Finally there is the solid, materialized image – for example when it has become a work of art: an image which has been decided upon, which ‘has been’ captured, an image which has become conscious of its own ‘reality value’.

Perhaps this biosphere of visual information and of visual stimuli, the aggregate landscape of images which surrounds us always and everywhere, might also be called ‘image sphere’ or ‘icon sphere’. Except that those decorative neologisms betray a rather one-sided notion of the complexity of the image as a whole – ‘icon’ and ‘image’ are only two ‘subjective’ names for two separate aspects of the one, ‘true’ Image – and they miss the wide reach of the concept of ‘media sphere’. After all this concept has echoes not only of the voice of the image, but also that of the ‘apparatus’ which makes the images possible, which determines, defines, produces and eventually also disseminates the images. So it is this notion of dissemination and fleetingness (‘evaporation’) that is crucially important here: the media sphere is the image flow – that is to say, it is both the images and the flow: both the element from which physics derives its right to exist, and the physics which ‘explains’ the elements; both the ‘what’ and the ‘how’. The flow of images shapes our reality, visualizes and represents it, makes it visible, mediates for it – until it also becomes that reality, converges with it. It is this media sphere, the wild, uncontrollably rampant landscape of images everywhere, which constitute Honoré δ’O’s biotope, literally his ‘hunting ground’ even - and to my mind it is not so ridiculous to present the artist as the man with the butterfly net: armed with almost nothing more than (for example) a sheet of paper on which the spectral image, the gaseous partial body of the media sphere, is briefly ‘captured’ and crystallized out into a clearly recognizable ‘thing’ – and so has the potential to materialize into a work of art.(...) (Dieter Roelstraete)