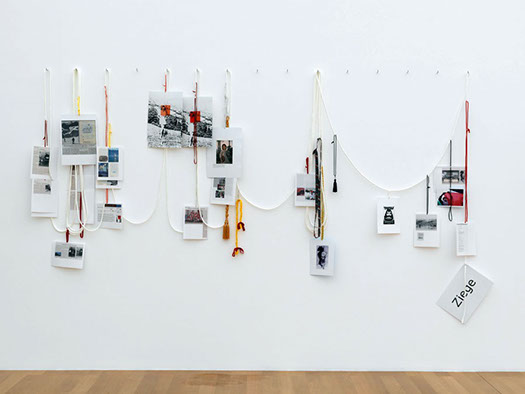 Eran Schaerf studied architecture, urban planning, video, and photography. He moved to Berlin in 1985, and began to develop an art, which encompasses different media and genres at the interface of narration and play. For the 'Schneider und Sohn' exhibit, hosted by the Berlin-based Zwinger Gallery, the artist designed in 1991 an environment consisting of everyday objects combined in manifold ways with components of images and words. He was, consequently, invited to participate in documenta in 1992, in the Venice Biennale of 1993, and the Manifesta in 1998. German is not his mother tongue, and due to this distance, Schaerf can treat language as if it were a piece of sculpture. Schaerf's works are rarely easily accessible. They are "bulky", escape the simple concept, and the artist prefers connections with new contexts to pre-determined, fixed notions. This focus led to the cooperation of Eran Schaerf and the philosopher-writer Eva Meyer in the early 1990s. Their scientific and artistic projects run parallel, and are interlinked in many different ways. Meyer has committed herself to the feminist movement. After having written her doctor's thesis ('Zählen und Erzählen. Für eine Semiotik des Weiblichen', 1982/83), Meyer became a visiting professor at many universities in Europe and the USA. Since 2003 she is a professor at the National Academy of Fine Arts in Oslo. In her last book, 'Von jetzt an werde ich mehrere sein', published in 2003, Meyer tried to determine a relationship of image and writing without the usual hierarchies. The philosopher describes, how to read texts with the help of the theory of the motion picture. Thus, she questions the status of the image, which shows her close ties to the art of Eran Schaerf.

Both have increasingly focused on radio plays and film productions since 1997. In a silent movie version of 'Europa von weitem' (1999) they present everyday scenes from Brussels. In a third version these are combined with a radio play by the same name. The radio play was composed, while the pictures in the film were unknown to the authors. The synchronous perception produces synergies. Schaerf and Meyer create new contexts in their works. (source : Skulptuur Projekt Münster 2007)