In Shaping Stones, Konrad juxtaposes found architecture with authored architecture, and modern with ancient. We see anonymous buildings in Lithuania, Mexico City, Hong Kong, and elsewhere-set alongside buildings by such well-known authors as Bloc, Gillet, Hans Hollein, Parent and Virilio, James Stirling and Fritz Wotruba. And we see as well ancient stone structures- in Avebury, Vienna, or Sardinia-juxtaposed to modern excavations of Carrara. This approach has much in common with that of inter-war modernism, as it forges links between the ancient and the modern, and asserts them through a democratization of the means: black-and-white photography and large-scale printing. The inside-out and back-to front quality of these photos, bath in terms of their indexical and their temporal nature, is shared with all engravings and lithographs, whether etched in metal or indeed drawn on stone. Konrad’s photography plays with notions of « original » and « index, » « nature » and « culture, » with the fact that the original « stone » cannot be dated and with its « social » shaping in the historic present. (...) (Penelope Curtis, From A to K) 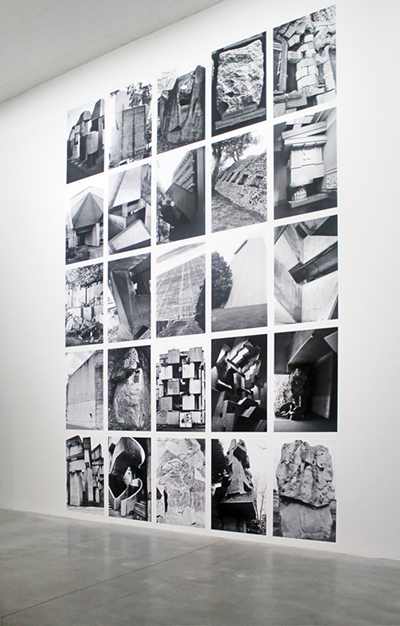 Over the last twenty years, Aglaia Konrad has systematically investigated the development of the global metropolis, the expansion of urban agglomerations and the rise of the mega-city in locations as diverse as Sao Paulo, Beijing, Chicago, Dakar, and Cairo. Her practice, which is based on extensive on-site research and an ever-expanding archive of visual material, primarily deploys photography, video, slide projection and large scale photographic installations of blown up photocopies or silkscreens, as well as the publication of artists books in the form of photographic visual essays.

Konrad is interested in probing the social, economic, historical and political parameters that inform and underlie architecture and urbanism, as much as she in interested in exploring the physical presence of architecture and building types, particularly those of modernist genealogy. At the same time she has also examined the infrastructure and sprawling urban networks that cities depend upon - from motorways and junctions, to airports, tunnels, and bridges - drawing our attention to the complex system of signs and codes embedded therein. Focusing on the physical fabric of the urban built environment and the hyper-city, her lens-based practice meticulously captures and transcribes its viral quality and alienating sense of the spectacular, while always maintaining an objective distance.